That Doesn’t Go There

There’s this really colorful little fish – Pterois volitans. Most folks know it as a Lionfish or Devil Firefish. They’re not incredibly huge, growing up to about 17 inches long. An adult might get as large as 2 or 3 pounds. They’re native to the Indo-Pacific, meaning the reefs around Australia, Japan, Polynesia, and parts of the Indian Ocean.

While they aren’t terribly large or full of teeth like a shark, they are voracious eaters. They do this cool bladder thing where they blow a jet of water at smaller fish, confusing their prey and orienting them so they point right into the jaws of the Lionfish. They’re also helped by an array of 18 venomous spines, which sort or resemble a lion’s mane – hence the moniker.

These spines and bright colors make the Lionfish attractive to fish fans, and that’s where the problem comes in. 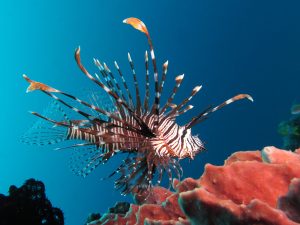 It seems that in 1985, Hurricane Andrew destroyed an aquarium in Southern Florida, and a bunch of little Lionfish ended up in Biscayne Bay in Miami. They were cool with that, and eventually made their way into the Atlantic. There are now thousands and thousands of Lionfish calling the reefs of the Eastern Caribbean and Southern Atlantic coast home. Following the Gulf Stream, divers have found them as far north as Cape Hatteras. In the summer of 2013, a diver caught one off of Rehoboth Beach Delaware.

These little fish love to eat littler fish, and smart folks who study these kinds of things say that Lionfish are radically decimating native populations of fish and drastically changing the ecosystem…

…But that has nothing to do with the James River Park.

We have our own versions of Pterois volitans along the James. We have Pueraria montana, Ailanthus altissima, and Hedera helix. You may know them better by their street names – Kudzu, Tree-of-Heaven, and English Ivy.

Plants like kudzu and English ivy were introduced to Virginia on purpose. They grow quickly and spread like crazy, so they became popular with landscapers to provide greenery and stop erosion. But not everything green is good.

Kudzu can grow a foot a day. Tree-of-Heaven (or Stink Tree) can drop 700,000 seeds in a season. And when these plants enter an ecosystem, they tend to strangle or smother native plants. This disrupts the balance of the soil, changes the diets of animals, and often leads to more erosion, which changes our water quality.

Almost everyone on this team is a volunteer. They spend hours in the woods throughout the Park, grasping at roots, clipping at vines, and sawing at limbs. Once an area is cleared, they can go back and plant native grasses and trees. This helps to restore the woods and marshes of the James River Park to what they were long before humans were around.

There are always several spots throughout the Park that need attention, and they’re always looking for a helping hand or two. 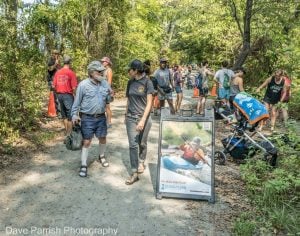 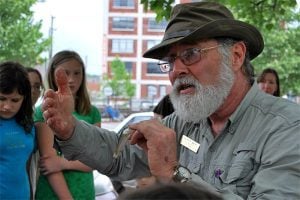